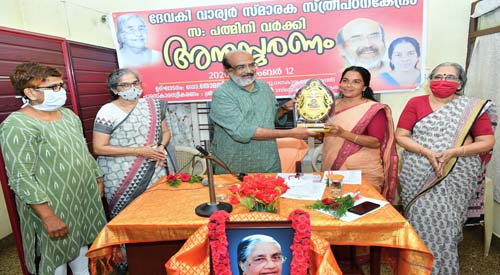 Social activist Jessy Emmanuel has been selected for this year’s Padmini Varkey Memorial Award 2020. Padmini was a prominent philanthropist and social worker. The award carries a cash prize of `25,000. The award for the best philanthropist was presented to her by Finance Minister T M Thomas Issac on December 12, Padmini’s fifth death anniversary.

The event was held at Devaki Warrier Memorial Hall in Thiruvananthapuram at 3pm. Jessy is a member of ‘Snehajalakam’, a voluntary organisation in Alappuzha.Jessy, who works in the palliative care sector, used to feed through the community kitchen those who could not afford to pay during covid . The price of the meal has not been determined yet. You can give whatever you want. You can eat without giving. In recognition of this service, it was decided to present the Padmini Varkey Memorial Award to Jessy Emmanuel .

P J Emmanual, fishermen’s union leader, is her husband and the couple has three children.